Be sure before, after, and during your listen that your purchase the new album. You can do that by clicking here.

Update 6: Updated the video above to a stream of the full song. The original preview post can be found here.

Update 4: Finally have what I think is a legit preview of the song from Japan. To preview just click play above or you can also go to the source here, and scroll to the bottom. You then have to hit play on song 14. It is all in Japanese, but you can use Chrome to translate.

There is still one more song the US audience has yet to hear from Daft Punk and their new album Random Access Memories. The Japanese version of the album comes with a bonus song called “Horizon” (4:24). The translated screenshot below shows the details of the of track from Sony Japan. Have a look yourself by clicking here. 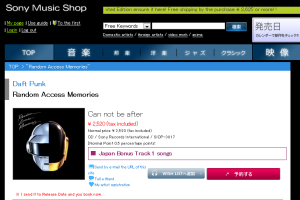 Update 1: Do note, I do not 100% trust the source. It could be a one off store unrelated to anything. I am researching more, but bonus songs in different regions is not unheard of. Stay tuned.

Update 2: There is 100% for sure a bonus song on the Japanese album release. This is done a lot of times because in some countries you cannot import certain goods. By adding another track it makes it a whole new album that can be then introduced into said country.

Update 3: I have yet to find any source or release of Horizon that is reliable. All of the songs I have found have been debunked in same way or another. Below I will list out these songs and debunk them so you do not have to.

Update 3.5: While it is not the new bonus material. Todd Edwards BBC Radio 1 Essential Mix contains official reworks of Daft Punk material that the robots themselves had some hand in (dunno how much). IT is something and in general the Mix is one of the best I have heard. Check it out here.

Fake Song 1 (The real name of this song is Vocoda by Etienne de Crecy):


Fake Song 2 (Cannot figure out the real song, but the sample is from Yellowire – Tonight Is The Night (Beato Mix)):


Fake song 3 (The real name of this song is – Free Hands by Destronics):